Independence Camp was an important way station for travelers heading to Pikes Peak via the Santa Fe Trail. But besides brief mentions of Independence Camp in Parsons' gold rush guidebook and in Julia Holmes' surviving letters, very little is known about the site. When I discovered the US Library of Congress actually had a drawing of that almost-mythical campground, sketched in 1859 by an unknown prospector from Pawtucket named Daniel Jenks, and that Jenks wrote about his visit to Independence Camp in his gold rush journal, I wanted to know more. 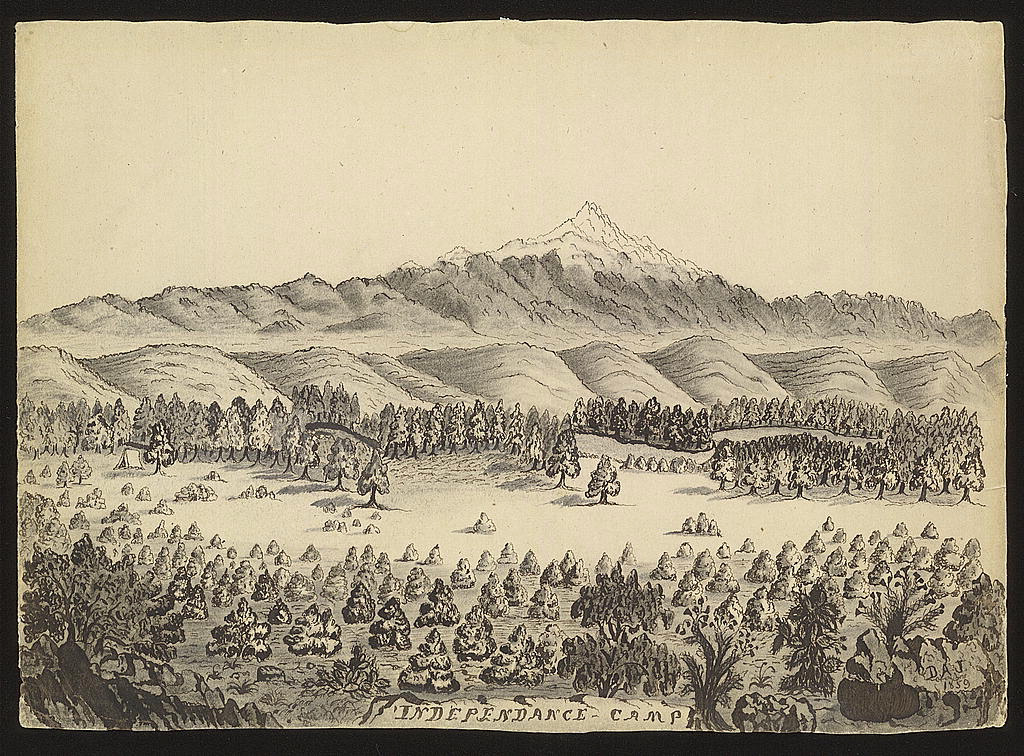 In his gold rush journal, Daniel Jenks wrote that his traveling companion, Loren Jenks, was so impressed with Independence Camp -- he decided to stay there. The few records remaining from that early period in Colorado's history confirm Daniel's story. Loren Jenks wrote that his farm 'Jenks Ranch' was on the east bank of Fountain Creek, 18 miles north of Pueblo. That would put it right in the middle of Independence Camp -- between Wood Valley and El Paso (Buttes) -- on the Cherokee Trail, a prime location for a trading post. In 1864, Loren Jenks and his family suddenly left the farm they'd spent years building there. 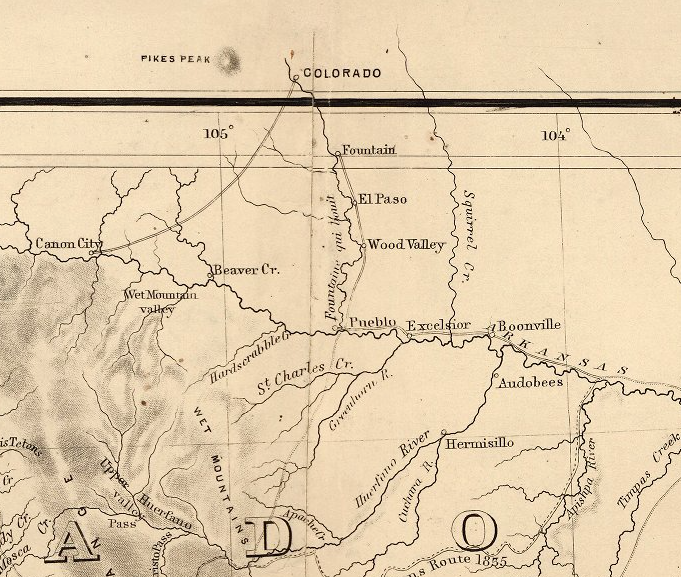 Loren Jenks and his family lived at Independence Camp from 1859-1864. Over the years, 20-25 other families joined them there. Loren even petitioned the US Government to place a Post Office there. In 1862 the US Postmaster approved Loren's application. But the name he suggested, "Jenks Ranch Post Office", was denied.

On the application form (which is filed out of sequence in the archive, making it difficult to find) the Postmaster scratched out the name Jenks Ranch and wrote in the name Wood Valley. The Postmaster also wrote a note at the bottom of the form: "I suggest the name of "Wood Valley". The said Ranch having been known by that name heretofore."

Loren's suggested location for the new Pueblo County Post Office (at Jenks Ranch, 18 miles north of Pueblo) was also rejected -- presumably because it was outside the boundaries of Pueblo County. 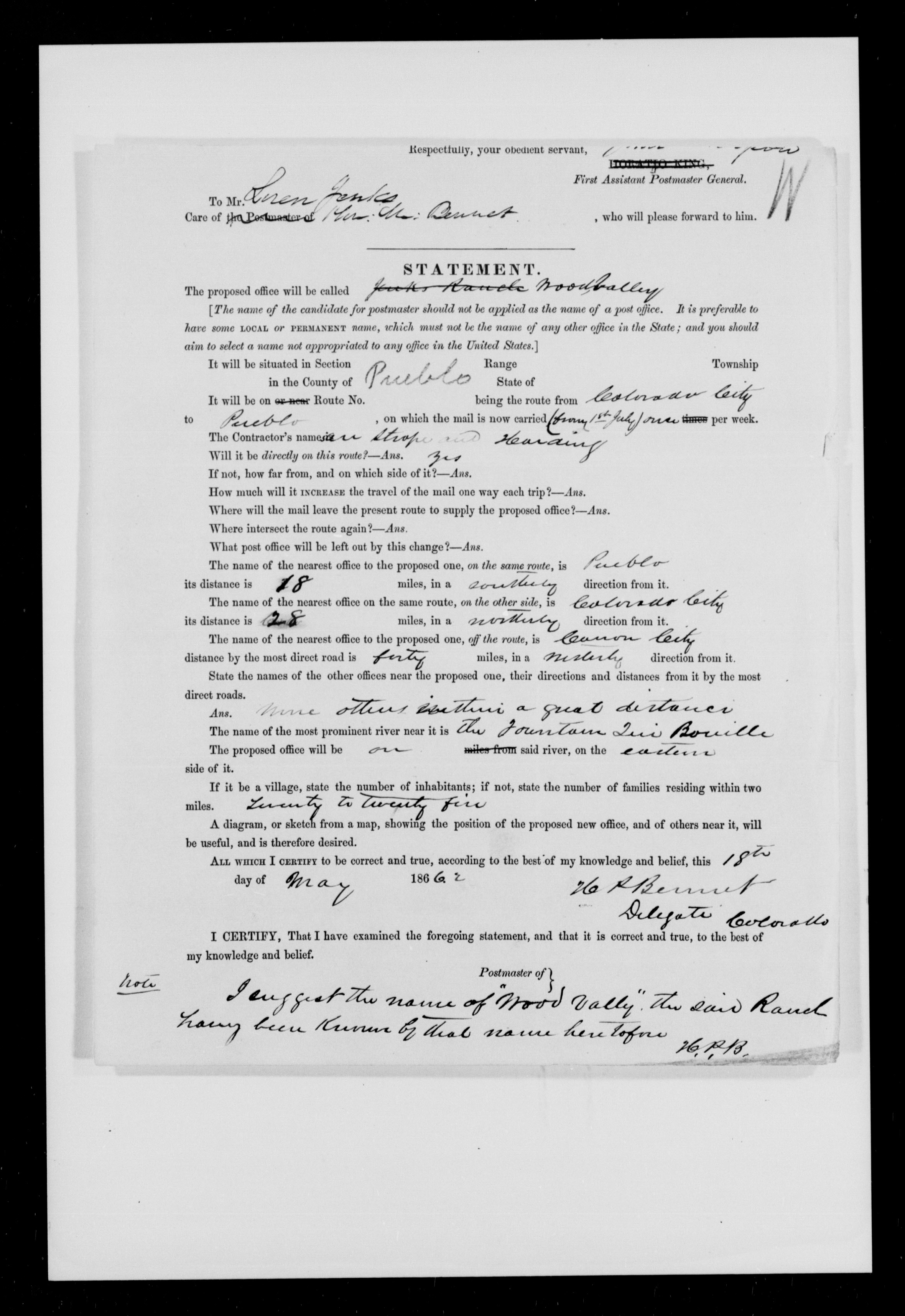 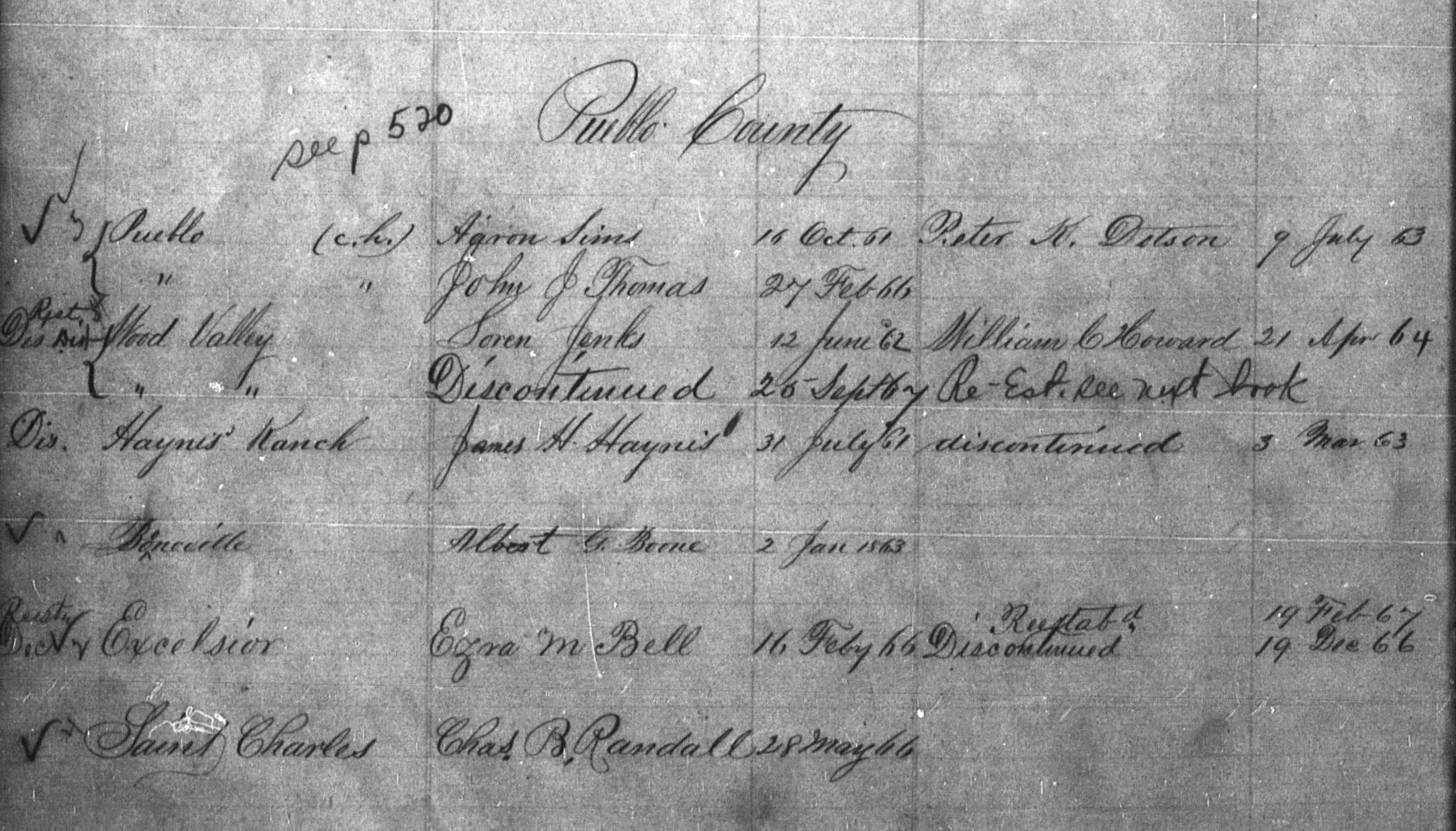 The Jenks family played an important role in the early history of Southern Colorado. Yet, outside of the Jenks Journals and a few brief mentions in Hall's History of Colorado, little appears to have been written about them. Here's an example of how important the Jenks Clan was during the early history of the Pueblo area. According to Hall; the first official meeting of the Pueblo County Commissioners took place on February 17, 1862. During that meeting the dimensions of Pueblo's County seat were defined as:

From Hall's History of the State of Colorado:

“In the spring of 1859 an acequia was dug and water taken from the Fontaine for irrigating purposes, by Josiah Smith; land was plowed, seeded and a crop matured. Corn and vegetables were sold to passing gold hunters at fabulous prices. Mr. Kroenig brought some livestock from New Mexico and engaged in trade. Immigrants poured in, the greater part however, en route to the gold mines.

In April the venerable Matthew Steele arrived with his family; Stephen Smith, a brother of Josiah, came out from the States, also William H. Young and Loren Jenks, whose wives were, after Mrs. Middleton, the first American mothers of the county.”

The Jenks Family Left Fountain Valley After The 1864 Colorado Flood

In 1864 severe flooding occurred all along the Colorado Front Range. The impact of the floods in the Denver area were reported in local newspapers. It's estimated the tsunami of water that came thundering down Fountain Creek that day was 18 feet high -- and nearly a mile-wide. But the first mention I've found about that Fountain Valley catastrophe was written over a decade later. The only first-hand account of the 1864 Fountain Valley Flood I've seen came from Dick Wootton. Dick's ranch was near Fountain Creek, a few miles south of Jenks Ranch.

The 1864 Fountain Valley Flood uprooted every Fountain Valley ranch and squatter encampment that was in its path -- including Jenks Ranch. After that epic flood, Loren Jenks and his family left Fountain Valley and moved south. In 1865 the Jenks Family were reported to be among the founders of Saguache, Colorado.